Speech by the UN Resident Coordinator in the Arab Republic of Egypt, Mr. Richard Dictus, on the occasion of United Nations Day

UN Day 2019 celebrates everything that the UN represents and has achieved since its establishment. 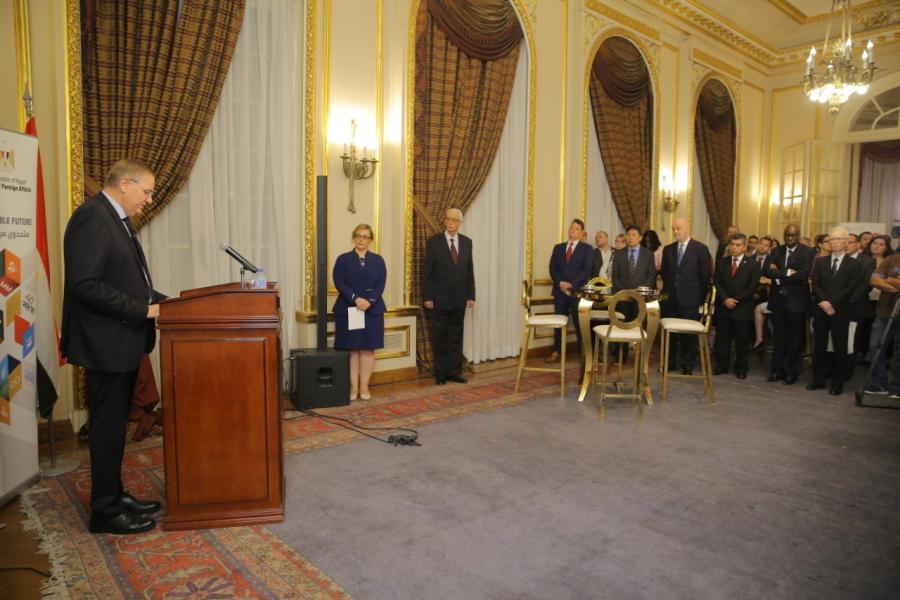 It is an honour to be here today with H.E. Ambassador Hamdi Sanad Loza, Deputy Foreign Minister for African Affairs and distinguished guests to commemorate United Nations Day at our annual event at the Diplomatic Club co-hosted with the Ministry of Foreign Affairs. UN Day 2019 marks the 74th anniversary of the UN Charter’s entry into force and celebrates everything that the UN represents and has achieved since its establishment in 1945.  As the UN Secretary-General mentioned in his message for this UN day, we are working for a fair globalization and bold climate action, pushing for human rights and gender equality and saying “no” to hatred of any kind.

The UN was founded, as outlined in Chapter 1, Article 1 of the Charter of the United Nations, to achieve:

3. international co-operation, and respect for human rights and for fundamental freedoms.

Egypt was there in 1945 and the partnership between Egypt and the United Nations had many highlights. Egypt is a founding member of the United Nations, one of the major troop-contributing countries to the UN Peacekeeping and has been a non-permanent member of the Security Council five times. Egypt chaired the UN Group of 77 last year in New York and this year in Rome. Egypt is home to some 36 United Nations offices and can be considered as one of the organization’s major regional hubs.

Therefore, this partnership has a long history of working together to solve multidimensional development challenges and is a partnership that highlights a united commitment to pave the way for a life of dignity and prosperity for all. It is a personal honor to be serving the United Nations in its journey towards supporting peace, prosperity and justice for all communities and individuals and it is a further honor to be doing so in Egypt, a proud contributor to the United Nations and a strong multilateral partner.

Your Excellencies, Ladies and Gentlemen,

“We are on a journey together. A journey to implement the decision of the General Assembly to undertake the biggest transformation of the UN development system in history. A transformation process in the way we deliver on development with sustainability at its core. While reforms are about process, the transformation that we seek is about people. Our efforts are geared toward implementing policies who empower those furthest behind.”

Egypt is one of the early adopters of Sustainable Development and has meanwhile submitted its second Voluntary National Review (VNR) to the High-Level Political Forum (HLPF) in 2018. In this respect, Egypt’s progress on Sustainable Development is being noted globally. In 2018, the Government of Egypt and the UN agreed on the 2018-2022 United Nations Partnership Development Framework (UNPDF). The UNPDF is founded in a close and extensive consultative process with the Government of Egypt and other stakeholders. The UNPDF is driven by the alignment to the National Sustainable Development Strategy; Egypt’s Vision 2030. Now in the second year of implementation, we are expanding the co-ownership of all partners of the UNPDF – with the Ministry of Investment and International Cooperation and the UN Resident Coordinator cochairing the apex body, and all other parts of the UNPDF Governance Structures (Results Groups) cochaired between the Government and the UN to ensure that the UN’s operations in Egypt continue to align and adjust to the evolving Sustainable Development scenario of Egypt.

The UNPDF is proving its value in being able to identify and articulate the UN system’s focus on Sustainable Development. At the same time, it also highlights the need for greater operational alignment to the National Sustainable Development Strategy – and we are awaiting the new National Plan to ensure we deepen this process.  The results achieved in 2018 and 2019, demonstrate that the UN is increasingly more focused on the 2030 Agenda and Leaving No One Behind. It is however work in progress, particularly where the UN needs to develop national impacts and achieve transformative change for specific target groups or substrata of the population. The capacity to scale up results have been demonstrated in, for instance, support provided to the Takaful &Karama Programmes, and the capacity for rapid national impact is highlighted under the National Strategy for Women’s Empowerment as Egypt exceeded its 2030 target set for the percentage of women with bank accounts in 2018 by 9 percent.

Other examples are the capacity of the UN system to provide pertinent, catalytic and timely policy advice in strategic Sustainable Development areas such as Education Reform and the recently adopted Universal Health Insurance Law. During the past year, the United Nations has been collaborating with the Ministry of Planning and Administrative Reform to provide integrated policy support to the multidimensional challenge of achieving Sustainable Development, as articulated in Egypt’s Vision 2030.  We explored how the government could organize for multiplied success, with greater emphasis on formalized coordination and making sure that well-articulated national plans find their expression in the national budget and medium-term public investment thinking.  We reviewed how the citizens of Egypt move in and out of poverty and have jointly understood that ill-health (sickness in the family) is the quickest way to the bottom of the economic pyramid. We have also confirmed that good social protection measures and good education are the quickest ways out.

Accordingly, we conducted an exercise about localization of global sustainable development targets, based on the premises that socio-economic challenges of modern economies like Port Said are different from rural agriculture-based economies such as Qena. Closely related to this process is the work that we undertook with the World Bank on macroeconomic modelling. That engagement concluded that efficient and effective institutions (good governance) have a direct and significant impact on economic growth. Moreover, models show how Egypt’s response to demographic challenges and population growth will become a major determinant of its future success.

Your Excellencies, Ladies and Gentlemen,

It is important to catch the undertone of this collaboration; Egypt can build on its recent successes in establishing macro-economic stability and become a global example of how sustainable development can bring a nation to unprecedented levels of prosperity and well-being for all its citizens – inclusive of the marginalized, youth, women and children. That must be the focus of the UN System in Egypt.

In the spirit of UN reform, the UN Country Team in Egypt strongly propagates that we build a forward-looking agenda for its programme around some key questions:

1. Transforming People’s lives: What transformative impact on the lives of people are required for Egypt to accelerate the pace of achieving the Sustainable Development Goals (SDGs) while Leaving No One Behind? What are the scalable national impact programmes where partnership with the UN can generate a differentiated impact?

2. Institution and Capacity Building: Which institutions are critical to the success of the SDGs in Egypt and what strategic support and capacity development do they require?

3. Strategic and Policy Advice: How does the UN best offer it strategic and policy advisory services and where can a new agenda be set, from an SDG perspective, for maximum impact, through UN Integrated Policy Services?

Finally, in order to achieve the aspirations of the SDGs, further investment will be required in data management and analysis as well as Monitoring & Evaluation systems and mechanisms strengthening in pursuit of evidence-based integrated policy solutions. Supporting and increasing the availability and utilization of data on SDG indicators and benchmarks must be a priority for the UN in Egypt and we are much looking forward to continuing our close partnership with the Ministry of Planning and Administrative Reform for the 2021 Voluntary National Report.

In closing, I hope that the Government of Egypt and the UN Country Team can build on the very strong foundation that we have. The new role of the UN Resident Coordinator will become clearer over the next year – the chief advocate of the UN -  for women and children, for the rights of people with disabilities, people living with HIV, for the marginalized and the poor, but also the conductor of a very complex orchestra with many players. I would like to thank our colleagues in the Government of Egypt, in particular the Ministry of Investment and International Cooperation and the Ministry of Foreign Affairs, for their strong leadership and continued dialogue – a leadership that has allowed us to showcase many of the elements of an effective UN reform. We are counting on further success together. I would also like to recognize the hard work and commitment of the UN Country Team in Egypt – we are a team in full transition and it is not always easy to practice our “shared leadership” approach where we are each and every one of us as individual leaders responsible for how the UN as a whole functions in supporting the Government of Egypt to accelerate the achievement of SDGs. Next year will be 75 years of UN-Egypt Partnership and you will hear and see more of us as the year evolves.