The Celebration of the International Day of United Nations Peacekeepers

It is a great honor for me to participate in the celebration of the International Day of United Nations Peacekeepers under the auspices of the Egyptian Ministry of Foreign Affairs.

Let me strt by sayin that the Arab Republic of Egypt plays a leading role in contributing to peacekeeping and peacebuilding around the world.

Since 1960, when Egypt first joined the UN peacekeeping operation in Congo, Egypt has been a consistent and a relieable contributor to peacekeeping. More than 30,000 Egyptian police and military have served under the flag of the U.N. in 38 peacekeeping missions in 24 countries in Africa, Asia, Latin America and Europe.

Regrettably, more than 35 peacekeepers lost their lives while serving in peacekeeping operations paying the ultimate price for keeping the peace.

This contribution is recognized globally. And the re-election of Egypt as rapporteur of the UN special peacekeeping operations committee and its election as Chair of the UN Peacebuilding Commission earlier this year demonstrate this recognition.

Further, the adoption of the Cairo Roadmap on Enhancing Peacekeeping Operations as the African Union position shows the thought leadership of Egypt on this topic. This demonstrates the two sides of the commitment of Egypt: as a leader in the global policy discussions, and as a contributor to missions on the ground.

The United Nations chose as theme for this year’s International Day of Peacekeeping: “the Road to Lasting Peace: Leveraging the Power of Youth for Lasting Peace and Security”. Let me shed some light on the critical role of youth in contributing to the global peace and security.

Let first look at the facts:

In this regard, countries will not be able to address conflict prevention and resolution in an inclusive and sustainable manner without taking into account young people’s perspectives in planning and decision making.

The UN Security Council Resolution #2250 on Youth, Peace and Security is a landmark as it acknowledges the important role youth can play in the prevention and resolution of conflicts.

Looking ahead, we need to keep the momentum and strengthen our partnership for collective action to promote and enhance peacekeeping performance.  In this regard I would like to share three notions.

First, we need to do more to support missions in the most challenging environments especially after the outbreak of COVID-19 pandemic. The pandemic caused further instability in fragile contexts. Food shortages and spikes in food prices stemming from COVID-19-related restrictions threaten to create unrest in many parts of the world. UN operations will need to help manage these stresses in many of the countries where they are deployed

Strategic partnerships are the key towards the effective capacity building and collective engagement of the peacekeeping contributors.

In this regard, I would like to commend the partnership between the Cairo International Center for Conflict Resolution, Peacekeeping and Peacebuilding (CCCPA) and the United Nations Family in Egypt for fostering dialogue, negotiation and mediation; early warning and early response and crisis management.

I also congratulate Your Excellency Minister Shoukry with the success of the Second Aswan Forum for Sustainable Peace and Development this year and focusing this forum on Post COVID-19 Recovery as its main theme.

Second, women peacekeepers are essential in promoting peace and security. There has been progress on increasing the numbers of women in peacekeeping at all levels, but slow progress. Ultimately this is about improving the performance of missions, as noted in UNSC Resolution 2436.

Increased  participation of women in peacekeeping missions will improve trust building with the communities and better address women’s vulnerabilities and needs.

We need to work together to remove barriers that prevent women from being deployed in peacekeeping missions.

Female peacekeeping officers act as real role models to the girls and women of these communities and their presence inspires young females to pursue their dreams, challenge gendered stereotypes and strive to gender equality.

Third, United Nations peacekeeping missions must set standards for sustainability and environmental management. Destruction of natural resources, contamination and land use pressure are all potential of conflict consequences.

The “Greening the Blue Helmets” initiative opens a new chapter for the UN in leading by example towards a greener and more equitable world. It highlights that sustaining peace and sustainable development are two sides of the same coin.

Allow me to conclude with a quote from the United Nations Secretary General, Antonio Guterres; “UN peacekeeping is an investment in global peace, security and prosperity. The blue helmets are a concrete expression of the Charter’s determination to save succeeding generations from the scourge of war.”

On behalf of the UN, I would like to express my gratitude to the Government for Egypt’s contribution to peacekeeping and its role in promoting international peace, security and sustainable development. 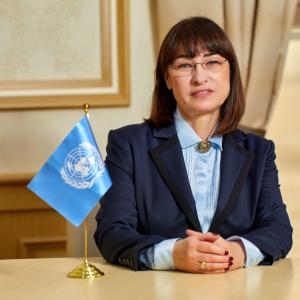